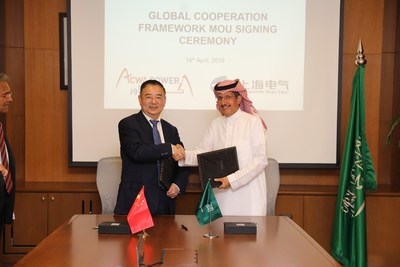 As part of the “2030 Vision” reform plan, the Saudi government aims to expand renewable energy generation to represent 30% of the country’s energy supply by 2030. Shanghai Electric has worked alongside ACWA Power to construct solar facilities since April 2018 in contribution towards this target.

“This win-win partnership will allow us to work more closely with ACWA Power to develop clean-energy projects globally and to build our brand internationally as we continue to expand operations along initiative countries.” said Zheng, adding that the Group plans to invest more in the region over the next several years.

Shanghai Electric has made efforts to grow overseas. In 2018, the Group’s overseas business income exceeded RMB 11.2 billion (about US$1.67 billion). Approximately 11% of this growth is attributable to global investment enterprise income, international engineering income and export business income.

To support the brand’s expansion, Shanghai Electric follows methods for global development. The first method has seen the company establish new enterprises in nine Belt and Road countries, including Vietnam, India, Saudi Arabia, Iraq and Malaysia. The second concurrent phase of development sees the brand expand its project footprint in initiative countries. Recent wins include the coal-electricity integration project in Pakistan Thar; the solar-thermal power project in Dubai; the power projects in Pakistan Qasim and Sahiwal; and constructions of the Panamanian and Serbian gas turbine projects.

Bombardier to Report its Third Quarter 2020 Financial Results on November 5, 2020