Transfer passengers now will have an opportunity to discover Istanbul, the seamless hub of the global carrier, through its new ‘Stopover’ service

Turkish Airlines, the carrier that flies to more countries than any other airline in the world, has now extended its ‘Stopover’ service for its transfer passengers, departing from Pakistan, Kazakhstan, Australia, Russia and Belarus to arrive to the U.S., Europe, South American countries, U.K., Ireland, Far East, Middle East, North Africa and Asia.*

Passengers from these countries who have over 20 hours of connection time in Istanbul can avail this service which was earlier offered to passengers travelling from Pakistan only. ‘Stopover’ services offer passengers a complimentary accommodation and a great opportunity to discover the unique beauties of Istanbul during their transit. 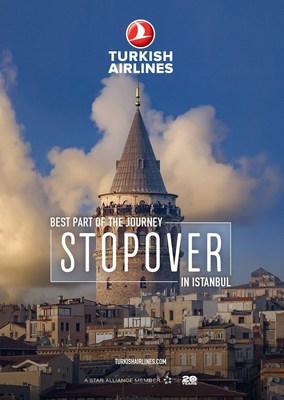 Mr Ahmet Olmuştur, Turkish Airlines’ Chief Marketing Officer, said: “After receiving positive response from our passengers we are excited to extend our ‘Stopover’ programme to other countries. We want to provide our passengers an opportunity to experience Turkish hospitality and several other attractions that the beautiful city of Istanbul has to offer. We are confident that our passengers will benefit through this programme and will make the most out of it.”

* The Stopover service is offered to-

Passengers travelling from Australia to: Europe, Balkans Region and Turkey

Established in 1933 with a fleet of five aircraft, Star Alliance member Turkish Airlines is a 4-star airline today with a fleet of 337 (passenger and cargo) aircraft flying to 299 destinations worldwide with 250 international and 49 domestic. According to the 2016 Skytrax survey, Turkish Airlines was chosen as “Europe’s Best Airline” for the sixth and “Best Airline in Southern Europe” for the eighth consecutive time. Having won in 2010 the world’s “Best Economy Catering Service”, in 2013 and also in 2014 the world’s “Best Business Catering Service”, and “Best Business Class Lounge Dining”, “Best Business Airline Lounge” awards in last year’s survey, Turkish Airlines was awarded again the world’s “Best Business Class Dining Lounge” and “Best Business Class On-Board Catering” prizes in this year’s survey. More information about Turkish Airlines can be found on its official website http://www.turkishairlines.com or its social media accounts on Facebook [https://www.facebook.com/turkishairlines ], Twitter [https://twitter.com/TurkishAirlines ], YouTube [https://www.youtube.com/user/TURKISHAIRLINES ], LinkedIn [https://www.linkedin.com/company/turkish-airlines ], and Instagram [http://www.instagram.com/turkishairlines ].

Govt decides to inoculate anti-coronavirus vaccine to all police personnel ...